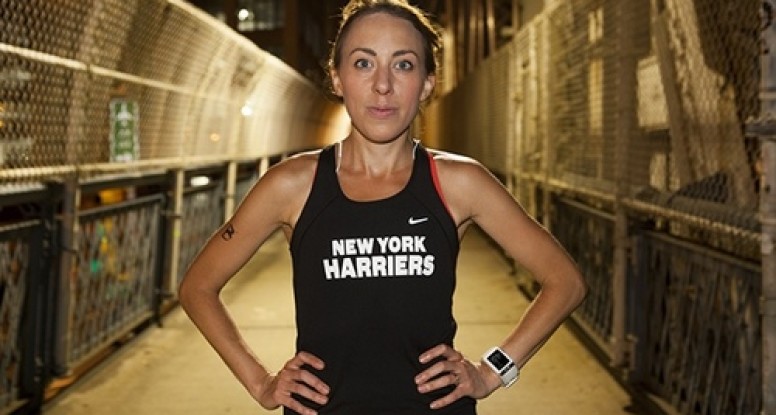 I moved to NYC to study architecture and interiors 12 years ago at Pratt Institute. I’ve definitely put in my time at design offices, working at several places that required LONG, HARD work hours, many times meaning my run happened on my commute home at midnight. It wasn’t until a little over a year ago that I was approached by SoulCycle’s design team, and finally found a place that brought together my love for design and fitness!

I started running about 7 years ago, when I dated a Nike pacer who gave me my first pair of running shoes. He didn’t last…but the running did! I joined the Harriers soon after, when I wanted to start training more seriously.  I liked that the Harriers offered a structure training program, but also promoted being social. I took over as president of the NY Harriers in February 2015. I wanted to (1) update and enhance our presence in the changing running community, and (2) create a bad ass race the Harriers could be known for.

It was my husband Adam that originally clued me into the urban running scene. About five years ago he had somehow heard about the Crit, just when they were adding the 5K running race.  We lived in Brooklyn and often ran at night, so I thought, “Why not?”  Not to mention that two years into my running career, I getting tired of running the same morning races in Central Park. I ended up surprising myself by running a 1 minute PR! The bike race portion of the Crit topped off the evening–SO bad ass! A couple of months later, Adam clued me into the Midnight Half.  David from Trimble Racing (who puts on the Red Hook Crit) was involved, so again I said “why not”. That night changed my running mentality all together. I sprinted with an NBR girl to capture the Prime, and ended up taking second place overall. THIS is what racing is all about!  The following week I started joining OSRs evening Tuesday runs.

In October 2014 I was recruited to join the pacers at Nike in recreating the Nike+ Run Club. So my running career has definitely run full circle!  I love that I am now a part of this group that is helping build better athletes in our local community.  The energy of this group is contagious, and the support that is given is returned 10 fold.

I have been friends with the team behind the Red Hook Crit ever since the Midnight Half and jumping into OSR runs. Take the Bridge was in part a success because of all the help I received from our running community, especially Joe DiNoto from OSR.  This winter, David and his team approached me about directing the Red Hook Crit after Pavel, the previous director, stepped down. They saw Take the Bridge’s success, and knew my involvement with the running community could help bring in local runners.  Sarah Gearhart also joined the 5K team with me, and together we are aiming to really put a spotlight on the running race! 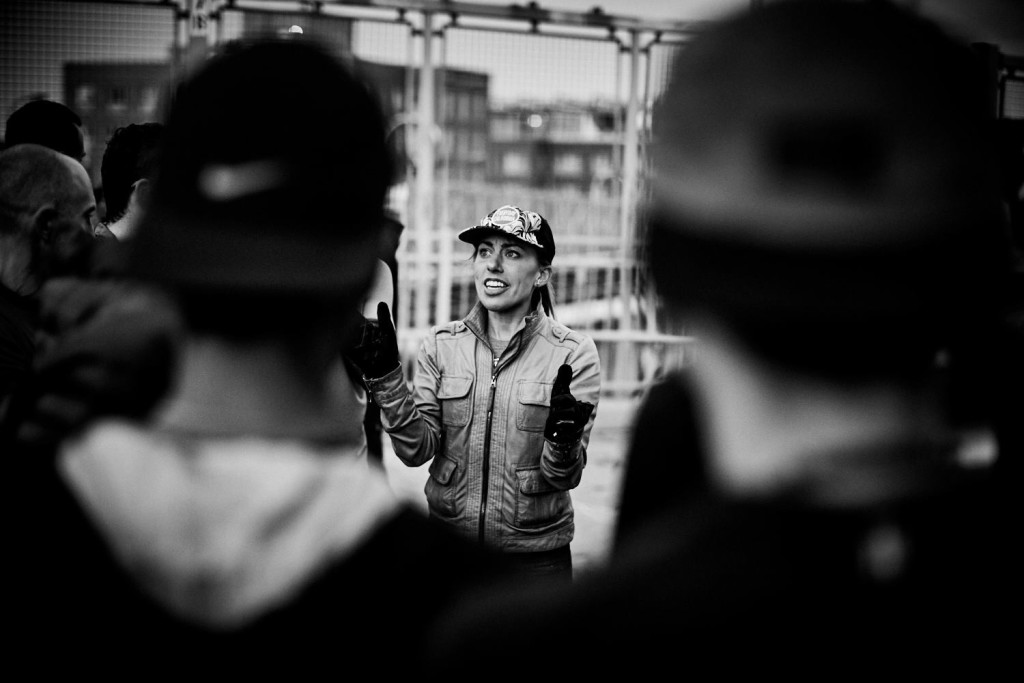 Talk a little bit about the culture of urban street running and how it’s changed since you joined the scene.  How does it compare with being a member of the NY Harriers, which is a more traditional running club?

The urban running scene started for me in 2012, when I raced the first RHC5K and the OSR Midnight Half. These races created an alternative to the standard, regimented race, and added an element of surprise and adventure! Running in general has experienced a huge boom in the past few years.  It’s really developed into a community activity, as opposed to running and training as individuals. The addition of running crews has built on the idea of your traditional running club, and given it an edge. Crews, which have been called a gang-like group of runners, often times includes people that don’t fit the traditional mold of a runner.  They draw groups of young creatives, entrepreneurs, and freelancers, or basically non-“type A” personalities.  Unlike clubs, crews are more relaxed.  They aren’t registered as a group with NYRR, or using the same park loop for their training, but instead are using the streets as their training ground, and participating in races that may not be sanctioned.  With the urban running community there is still that training element, but it is more about the social engagement, and the experience and adventure of running as a group. Because we are seeing these creative individuals being engaged, and the aspect of sharing that adventure, we have also seen a number of talented photographers that are documenting every moment!

Describe the inspiration for the Take The Bridge series (i.e. Adam’s idea!). Where do you see it going in subsequent editions?  What are your motivations in launching and producing this race concept?

One of the main responsibilities of being the President of the NY Harriers, and a board member, is organizing the team’s race each year.  In previous years, we had organized a 5K either in the Riverside Park on the west, or Randall’s Island.  Although we had steady numbers of runners coming out, we were constantly competing with the schedule of NYRR and NYCRUNS races, and in the last couple of years we actually had to go through NYCRUNS for permit reasons.  We wanted to be able to throw something that would give us back full creative control.  My opinion was that we needed to create something that didn’t compete with these standard races, but instead offered an alternative. Of course, my love of urban running was a huge inspiration.  After one night of brainstorming over drinks, the idea evolved — and I will give Adam full credit for coming up with the name for “Take the Bridge”.

At the end of the 3 race series last year, and at this past March race, we added a Prime prize.  A prime is a common element in cycling races, awarding a prize to the first rider to pass a check point.  We made our check point the turn around point of the out and back for the bridge.  During March’s race we saw a male runner, who had constantly placed just out of the award positions, take a new tactic to his race.  He went out fast, with his primary goal of getting the prime, and then coasted through to the finish.

In upcoming editions, I would love to add more elements or factors, to continue to keep things interesting.  I could see us utilizing the bridges more, or maybe adding a team element . . . who knows! 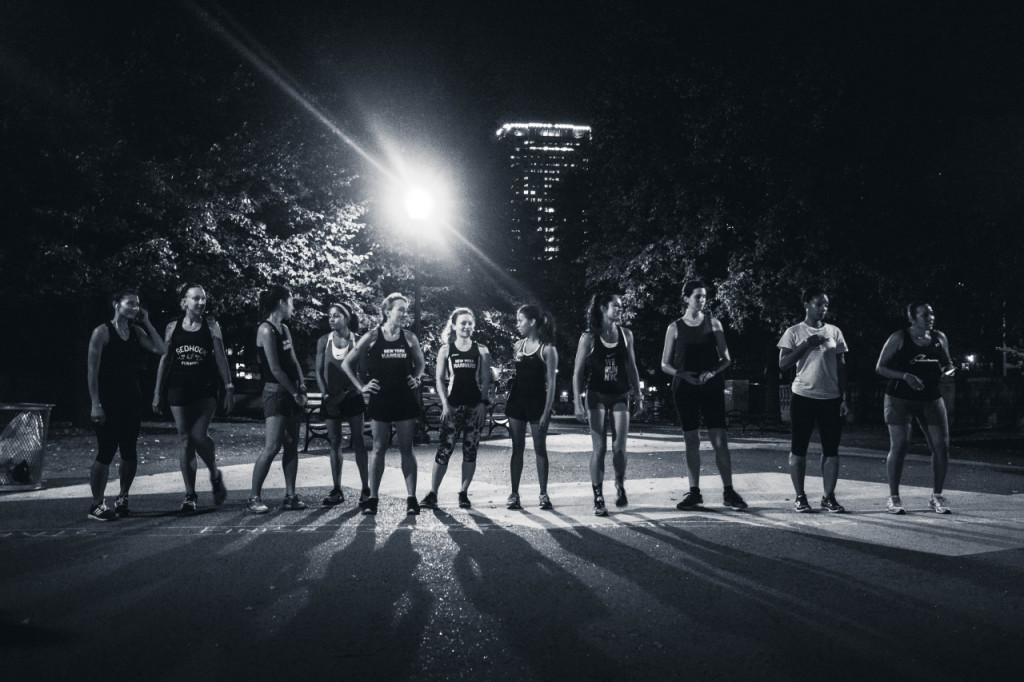 What does the Red Hook Criterium 5K race bring that’s new and exciting to the sport of running, and more specifically the culture and sport of “urban running?”  Where can this race concept go in Brooklyn and beyond?

The RHC5K introduces the elements of running in the dark, in a neighborhood that a large amount of New Yorker’s have never visited.  This race is essentially about adding adventure, excitement, and an element of newness to the racing community, that just isn’t present in your Saturday morning, loop of the park, 5K.

The RHC5K is also unique in that it brings the community of bicyclists and messenger bike riders in the city, and the urban runners together in one night.  Runners come early to watch the qualifying rounds of the bike races, and stay after to watch the final crit.  It only makes since, as these two communities are intertwined in the city.  Plus, having these two races together in one night really brings the energy to a level that is unmatched by any race out there in the NYC.  I am so excited to be a part of it!

What do you see as the next evolution of the NYC running scene?  We all can safely assume more growth, but in what ways?  How does this compare and contrast with the Soul Cycle/spinning scene?

It is so exciting to see so this evolution of the street running scene. There are so many new crews popping up all over the place.  NYC is really the epicenter of it all, and there is so much great documentation and social sharing going on. It is definitely showing other cities what is possible for this “active” lifestyle. I can only see this continuing to grow to cities across the country.

Just like SoulCycle, other fitness initiatives like November Project, and the healthy lifestyle movement in general, this is no longer just a NY or LA thing. 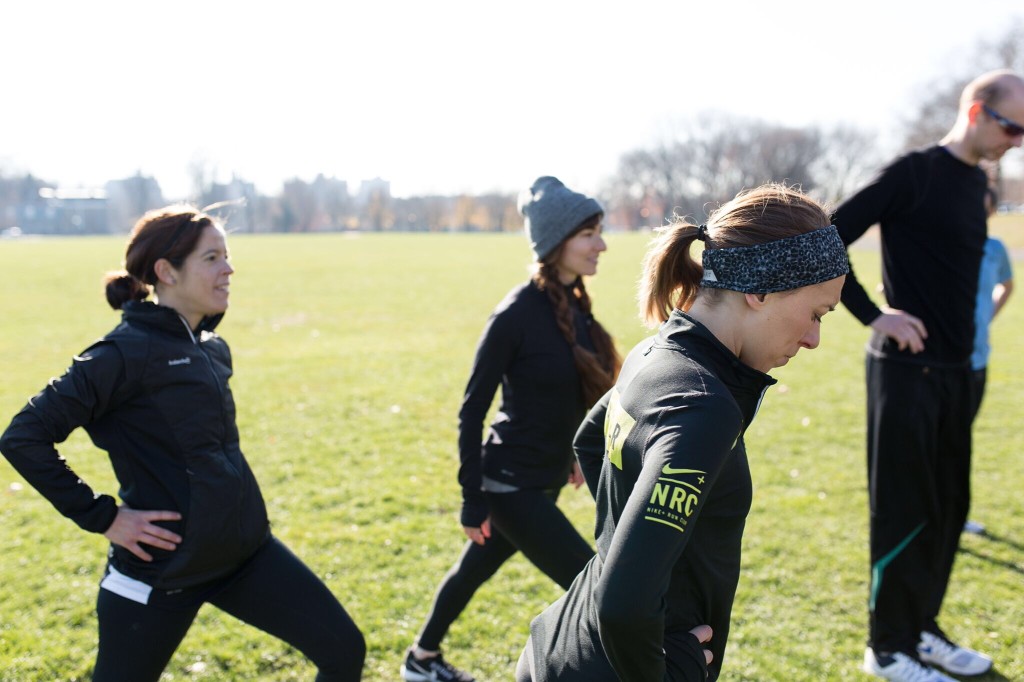